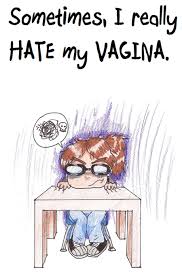 Okay… So I guess I don’t HATE my vagina, as opposed to just hating the reproductive organs that come along with it.  Okay…  I guess I don’t officially hate them either, considering they have assisted in the creation and birth of my two gorgeous children.  So really, I don’t HATE my “girly parts” at all… but I DO have serious issue with them!  I DO have issue with the chronic pain I have lived with since my period started at 13 years of age.  More particularly, with the severe pain I have experienced probably 50% of the time (for the past 15 years) with thanks to both the menstrual and ovulation cycles.  Similarly, I DO have issue with my fear of leaving the house, knowing the inevitable flood my heavy menstrual bleeding will create.  With the moodiness, the highs and lows of emotion, hormonal fluctuations, not to mention the self-doubt my periods have caused… and, of course, the age-old question, “Why is this happening to me?”  Damn you, Dysmenorrhea, Endometriosis, Mittelschmerz, and Menorrhagia!  😉  But, through all of this, what I am thankful for is I’ve FINALLY been able to do something proactive about it.  It’s been a long, long, road but it seems the light at the end of my tunnel has been reached.

My menstrual journey began normally enough, however after the first year it was obvious something was not quite right with regard to the amount of period pain I was experiencing.  So off to the doctor we went (my mum and I), to be told – as all good doctors do – that my easiest solution would be to go on the contraceptive pill.  So at age 14 that’s what I did.  And then by age 16, I was told to skip the “sugar” pills and take the pill constantly so as to avoid having a period all together (as this apparently would ease my endometriosis symptoms/damage).  I learnt very quickly how to manage my period pain during those teenage years, but what  I didn’t manage very well were my hormonal moods swings and episodes of intense anger.  Interestingly, I thought this was simply who I was and resigned myself to living a life feeling and behaving this way.  So for 15 long years I rode an emotionally-charged, hormonal roller coaster until eventually (at age 29) I went off the pill and almost immediately felt like a different person.  Suddenly I was clamer, more emotionally grounded, able to walk away from emotionally heightened situations, and simply “be me” again.  Not that I even knew who “me” was because the pill had clouded this “peaceful” part of my personality for so long.  It pains me now to think about how my life may have been different through those teenage years if only I hadn’t taken the pill.  It’s not anyone’s fault of course.  Decisions were simply made based on the information we knew at that time.  All the girls were taking the pill for period pain and contraception – why would I react any differently to them?  Because I was one of the small percentage of girls who experienced adverse effects to the hormonal changes the pill creates in our system.  And as we already know… hormones and me, well… we just don’t seem to get along.

At age 29, after years of suspected endometriosis and trips to the specialist, I went in for a routine pap smear only to be called a week later to say I had to have emergency surgery the next day.  My pap smear results had shown a CIN3 level abnormal cervical cell change in the 12 months since my previous pap smear (which I was having regularly due to my ongoing issues).  I had put off having a laporoscopy for years to treat the endometriosis because of my fear of hospitals and needles.  Needless to say, now I simply did not have a choice in the matter.  So the day after said phone call, I was in hospital having a LLETZ Loop procedure performed for the abnormal cervical cells, a laporoscopy for the suspected endometriosis, and a hysteroscopy to determine any uterine damage or effects on my fertility.  Fortunately my results were good with successful removal of the CIN3 cells, with limited structural damage or impact on my cervix.  I had numerous endometrial scarring deposits (which were expected), with the worst being external to my uterus taking up residency and causing adhesion’s between my uterus and right ovary.  All endometriosis was removed and the hysteroscopy showed positive results with regard to my future fertility prognosis.  All in all, I guess you could say it was a very productive day at the office for my specialist (and for me too).  Whilst these procedures didn’t stop the pain and heavy bleeding I’d always had with my period, it was a relief to know exactly what was happening “down there” and the added emotional benefit of no longer being on the pill was the icing on the cake.

A common myth surrounding endometriosis is that it can be improved by having children… “It’ll get better once you have kids”, people would always say.  Um, unfortunately not.  After the birth of our LM, and then again after MH, my periods only worsened.  The ovulation pain (“Mittelschmerz”) was equally as intense as it was debilitating, lasting for nearly 4 days of every month.  My period pain would last over 24 hours (again, debilitating), and the heaviness of those first two menstrual days was hideous.  When I realised things were again getting worse after MH’s birth, I decided to go and see Dr B about putting a stop to this nonsense once and for all.  His question to me was very simple:  “Do you want to have any more children?”  Having always known MH would be our last, it was an easy reply:  “No.”   And with that, we discussed my options.  I knew I didn’t want a hysterectomy at this stage in life, so we talked through other procedures that may help ease the intensity of my symptoms.  After only half an hour of discussion, my mind was made up and we had scheduled my surgery date for the 1st of July.  I just needed this pain to be over and my quality of life back.  I was booked in for a diagnostic laparoscopy to remove any new deposits of endometriosis, an endometrial ablation (utilising the Novosure ablation method) to alleviate the heaviness of my bleeding, the insertion of a Mirena device to help ease the ovulation pain, and a pap smear (why not do everything!).  It was a full system overhaul!  Dr B stated if he could improve my symptoms even 50% that would return my life back to some degree of “normalcy”.  I crossed my fingers and hoped for the best.

Not surprisingly, my endometriosis had returned with a vengeance over the years and many more deposits were removed.  Dr B made note of two particular external deposits of scar tissue adhesion’s which were “quite unique”.  One deposit had adhered itself through my cesarean section scar, and the other behind my uterus (between my uterus and bladder).  He even provided photographs (see below)… The first image shows the scar tissue deposits as he found them (cesarean on the left, between uterus and bladder on the right), while the second shows the same sections now clear of the adhesion’s.   Sorry if this is a little too much information, but I actually find it all quite fascinating!

After the laparoscopy, Dr B proceeded with the endometrial ablation which involved burning the lining of my uterus away to prevent the blood from depositing as it normally would.  He predicted the procedure to be successful with “95%, a good coverage” of the uterine lining being treated.  Great news.  Next the Mirena was inserted, the pap smear completed, and the rest (as they say) is history.  Whilst my recovery was nothing to write home about, with considerable pain and discomfort for the next two weeks, the overall success of my surgery has been a godsend.

I’ve been through two menstrual cycles now since my surgery and have experienced only slight twinges of discomfort around ovulation time and then again when my period is due.  The good news is rather than lasting days on end as the pain normally would in both cases, the discomfort only lasts an hour or so.  My actual period is also considerably improved and virtually non-existent (save for perhaps a slighly brown-ish discharge lasting 3-4 days).  There is no bleeding at all!  My disbelief about this has me constantly waiting for something to give, something to happen, for the bleeding to start.  But it doesn’t.  On the success scale, Dr B assures me this result is right up there with regard to the best possible outcomes and is extremely pleased given it’s better than even he expected.  And whilst in 5 years time my Mirena will need to be removed, and a new one inserted, and there’s a chance my ablation will need repeating, I can comfortably say I would recommend this path of treatment to anyone experiencing severe endometriosis symptoms.  The downfall, however, is you have to be certain you no longer want to have children.  The endometrial ablation doesn’t prevent you from falling pregnant, but it does prevent you from carrying a baby full-term and this is something many people misunderstand.  Hence, the insertion of the Mirena.  Not only is it helpful in providing relief from ovulation pain, but also important as a form of contraception.
Thanks very much for taking the time to read this post, particularly if you are also struggling with endometriosis.  To be 95% pain-free after so many years of chronic pain is an incredibly liberating experience and one for which I’ll be forever grateful.  I feel very lucky to have had such a positive result when I am well aware many women are not as fortunate.  Endometriosis is a nasty and debilitating condition, and it’s something we as women should be speaking about more often.  As they say, awareness is key… March Into Yellow! 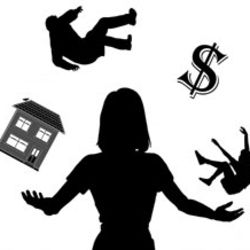 "Nobody can go back and start a new beginning... but anyone can start today and make a new ending." - Mary Robinson